The concerning developments in Ukraine with Russia launching a military offensive against key targets has been an extremely difficult and stressful time for many and LGE’s thoughts are with the citizens of Ukraine.

The commodity markets moved sharply higher on Thursday as events unfolded and the scale of the action by Russia became apparent. Whilst the flows across the borders from Russia into Europe remained, little changed from those observed over the previous few days, the market prices for the shorter dated contracts gapped higher on the market open and continued to rise throughout the day as concerns about supply disruptions and further sanctions from western governments loomed large in traders’ minds. The global recovery from the pandemic had already seen commodity prices starting to increase from summer of 2021, to reach highs towards the end of that year as Europe had entered the winter period with historically low gas storage levels, due to a tight global gas market fundamentals. In more recent weeks, energy markets were beginning to moderate, albeit at levels higher than the previous five-year average, as Europe looked to exit winter with storage levels similar to those observed following the Beast from the East in 2018.

Whilst the UK is not overly reliant on Russian gas, which accounts for only 4% of its demand, it is not the same story for other European countries which have a greater dependency on Russian flows. In Germany, circa 42% of the gas required is supplied by Russia and the amount to Italy is a slightly higher figure again. The UK’s comparatively smaller reliance on Russian gas does not mean that it is insulated from the price movements in the markets, as gas is traded globally and the UK is physically interconnected with Europe, resulting in our prices moving in tandem with those observed at European trading hubs such as TTF in the Netherlands.

It is too early to make predictions of what will happen next and how commodity prices are likely to react over the coming days, weeks, and months. Much will depend on global response to the Russian actions, particularly the sanctions which Europe are likely to deploy and whether they extend to an embargo on Russian gas deliveries, as well as the financial sanctions already outlined and whether Russia capitulates under those sanctions. If gas, oil, and coal supplies are disrupted then prices will undoubtedly increase further, as it is unlikely that those supplies currently supplied by Russia can be replaced in the short-term from other sources, despite the best efforts of American and European leaders encouraging places such as Qatar to make up the shortfall.

It is the opinion of the LGE trading team that the next few days are going to be key to see how the situation develops and to give the markets the necessary time to digest the barrage of information which it is currently receiving. When events like this happen, often the market tends to overreact and then settle, so it is important to remain calm and evaluate current trading strategies with your energy consultant and plan for the next move in the market. It is at times like this that a well-managed risk management strategy is crucial to manage market volatility and price risk. LGE is working tirelessly during these turbulent times in the energy market to ensure that clients are kept up to date with market developments and appropriate action taken. 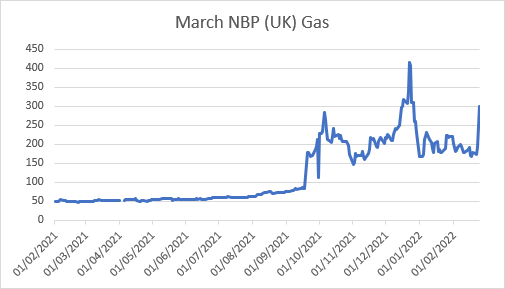